Note: There are no direction marshals on route and entrants are responsible for familiarizing themselves with the route or must walk/run with somebody who is familiar with it.

A route profile and Don’s hand-drawn map (not a topographical map) can be accessed at the end of this page. The profile is scary and the map is a real collector’s item!

The following description is a brief one, but gives a good idea of the basic route.

Start at Greenmarket Square and proceed through the Company Gardens, turn left into Orange Street, head up Upper Buitenkant Street to Deer Park Drive and enter Deer Park at the top of the road.  Zig-zag through Deer Park to Tafelberg Road; note the landmark pine tree at the top. Turn left at Tafelberg Road; the path to Devil’s Peak is less than a kilometre along the road. Take the zig-zag path to the saddle and head in the general direction of the peak. The path rises for some time before eventually ‘flattening out’ and you will soon reach a fairly distinct large rock, “Breakfast Rock”, where you turn right (don’t go left). Start looking for the firebreak path that climbs to the left and leads more-or-less directly to the peak. The top of the peak is the second beacon, which is not more than about 100m from the first. Stay on the paths at all times.

As for Peak One, you run up to Tafelberg Road. Turn right at the pine tree – the start of the route up Platteklip Gorge is several hundred metres along the road. Follow the signs – turn left at the contour path and look out for the sign that indicates the main ascent up the gorge. Zig-zag up the gorge, staying on the path at all times. On reaching the top of the gorge, turn left and follow the yellow footprints to Maclear’s Beacon (at 1086m Maclear’s is the highest point on Table Mountain). On leaving the beacon for the return, ensure that you are on the correct path; if you are too far left or too far right, you could land up in trouble!

On returning to Tafelberg Road you may, as a welcome alternative, want to turn left and enter Deer Park less than a kilometre along the road (at the boom gate opposite the toilets). Note: it is also an option on the way up, for both the first and second legs, but is definitely steeper and can be more energy-sapping at that stage. There is more than one option but you can exit Deer Park at Bridle Road and approach Orange St via Upper Orange St. If you don’t know this route, stick to the tried and tested.

The start of Lion’s Head, at Signal Hill Road, can be reached by going all the way up Kloof Nek Road or taking the more direct route past the Deutsche School. For the latter, leave Kloof Nek Road at St Michaels Road and turn left at the stop street, into Upper Albert Road – the path begins at the top of the short, steep hill. Scramble up to Signal Hill Road and turn right. Access to Lion’s Head is via the parking lot next to the Kramat; a checkpoint is also positioned on the tar road opposite the entrance. The path winds ‘gently’ up to the contour path from where two sets of staples and chains, a couple of ladders and some scrambling leads to the summit. Do not use erosion paths!

There is a slightly longer alternative route that avoids the staples and chains. There is some exposure on the final ascent – be careful at all times, particularly on the way down, when the excitement of getting to the finish at Greenmarket Square might threaten to break your concentration.

Important: In completing the Pensioner’s Peaks, you will obviously not be credited with having completed the ‘classic’ version of the Three Peaks Challenge.

Safety, your own and that of others, is a priority! Besides being physically demanding, the Three Peaks Challenge requires a great deal of concentration. Weather conditions can be extreme; dress appropriately. Be well prepared!

The event takes place in an ecologically sensitive area. In the interest of Table Mountain National Park and the continued existence of the Three Peaks Challenge, please respect all rules: do not use erosion paths; do not litter; do not damage or remove indigenous vegetation; respect other TMNP users and visitors; respect the cultural value of the area.

Don’s map (not drawn to scale) 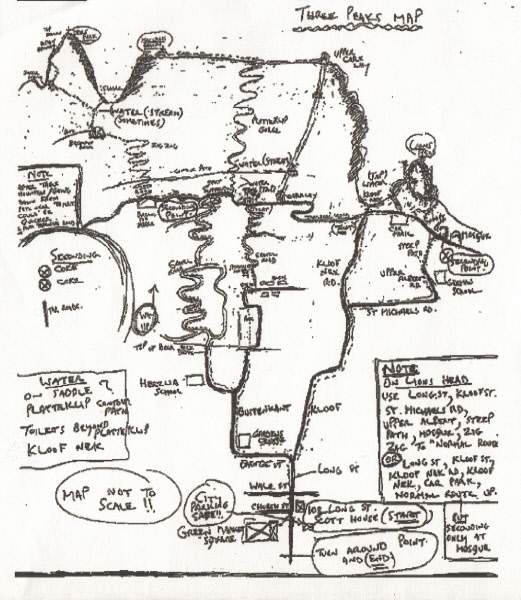 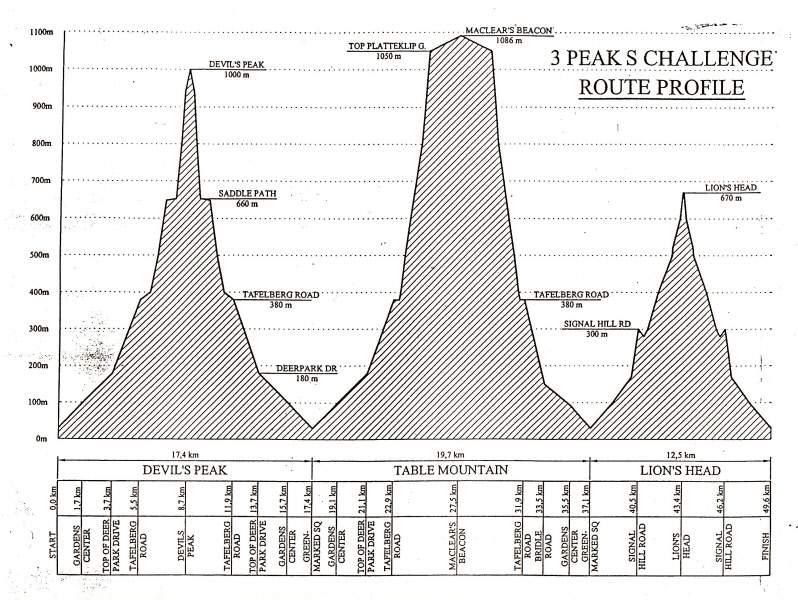